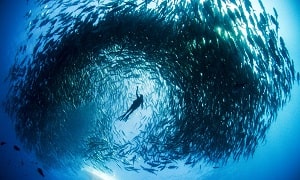 Guillermo Del Toro’s Shape of Water winning Best Picture at the Academy Awards is historic for a number of reasons: it’s one of the few horror films to win Best Picture, and it’s Del Toro’s first Oscar.

It’s also probably one of the only Oscar-nominated films to include a sex scene between a human being and a sea creature.

Del Toro isn’t the first person to imagine an aquatic pairing with a human. Here are a few of history’s fictional and real instances of romances with fish and sea creatures.

The Girl Who Talked To Dolphins

This aquatic love story, much like Shape of Water, also takes place in a lab.…