But who are we to judge?

In “Sex in the Sea,” Marah J. Hardt, research co-director of the nonprofit Future for Fish, gathers tales of marine love that are often as hilarious as they are disturbing.

“Right now, somewhere out there in that big blue sea, you can bet that some creature — if not sneaky, and perhaps acrobatic — hank-panky is going on,” Hardt writes.

“We’ve lifted the veil enough to show the colorful and kinky world of sex [that] drives the ever-unfolding diversity and abundance of life in the sea.”

For instance, though the blue whale has the largest penis of any animal in the world (10 feet!), the lowly barnacle boasts the biggest member when taking body size into account. I mean, did you even know that a barnacle had a penis?

Here are some of our favorite tales of love from the deep. 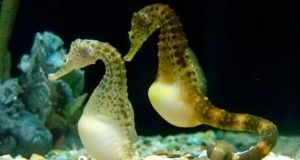 Sea horses are one of the most monogamous species in the underwater kingdom. Though faithful only through mating season — which lasts about 100 days — they will stay with a mate even in the event of injury or illness. Further proving that sea horses are a catch, the males become “pregnant,” carrying the babies in a warm pouch that protects them until they hatch. 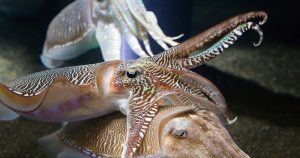 Female cuttlefish are notoriously picky — rejecting upwards of 70% of hopeful mates. So what is a small cuttlefish to do? Pretend to be a woman, of course.

Females are smaller and also have mottled brown coloration and shorter arms — easily mimicked by the already smaller males. The cross-dressing male changes his coloring to mimic that of a female’s and tucks in his arms, “taking special care to hide his modified fourth arm, the one all males use to hand sperm packets over to the female.”

Not only is the female fooled, but the dominant male is, too. The cross-dressing male waits until the bigger male is occupied with another mate and immediately shifts back into his courtship colors.

“If all goes well, the female will allow him to mate with her. She often does, perhaps impressed by his cunning ploy,” Hardt writes. “Being small can have its perks.”